Last summer, I read the book How to Tame a Fox, by Lee Alan Dugatkin and Lyudmila Trut. I found the scientific story of fox genetics and domestication in the Soviet Union/Russia to be a compelling mix of biography, science, and politics. In June 2017, I wrote a blog post about the book and other domestication studies in the news. Earlier this month, I spotted a new scientific report in the science journal G3 (Genes, Genomes, Genetics) about one of the ongoing studies in the fox research project. The article title, “Anterior Pituitary Transcriptome Suggests Differences in ACTH Release in Tame and Aggressive Foxes” caught my eye, because one of the key questions about breeding tame foxes is whether humans could also breed foxes to also demonstrate the opposite behavior type: aggression. Are aggression and tameness really just two extremes along a continuum of genetically programmed behavior? The fox study has been monitoring three different groups of foxes: “regular” wild foxes, foxes bred for tameness, and foxes bred for aggression. 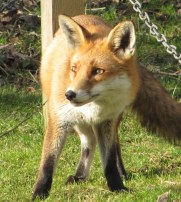 A domesticated fox (Vulpes vulpes) in England. By Dan Davison from Rochford, England (fox) [CC BY 2.0 (http://creativecommons.org/licenses/by/2.0)%5D, via Wikimedia Commons

Like the titles of most scientific reports, this one contains some technical terminology specific to the research project. What do “anterior pituitary transcriptome” and “ACTH release” mean? The researchers were looking at wide-ranging gene activation patterns in the pituitary gland in the brains of foxes and how they might impact the levels of a stress hormone (adrenocorticotrophic hormone—ACTH) in the body. As we might expect, stress hormones trigger various physiological responses in animals—and we know tame animals generally have lower levels of stress hormone release than aggressive animals, causing them to act less fearful around humans. So, what genes and underlying mechanisms cause these hormonal changes? That was the point of the study. The researchers created a catalog of possible genes that will be interesting to study further. Some of these genes had intriguing effects on underlying cell structure and behavior that could help us better understand the connections between genes, cell biology, hormone signaling, and behavior. For more information on this report, I will refer you to a blog post by Matthew Wexler, writing for “Genes to Genomes,” a blog site accompanying the journal. It includes more analysis and an interview with the scientists involved in the study.

Foxes aren’t the only animal we study to understand tameness and aggression. The workhorse (so to speak) of genetic studies—the trusty fruit fly (Drosophila melanogaster)—also has been revealing some of the inner workings of behavioral traits. Another “Genes to Genomes” blog post earlier this year, by Nicole Haloupek, highlighted a study published last month about a gene involved in neuron function and its impact on whether or not male flies will fight with each other (as evidenced by battle scars on their wings). Check out this video to watch two male flies threaten each other and shake their wings. Clearly, we have a long way to go to understand the inner genetic, biochemical, and physiological triggers of complex behavioral traits. And the differences among species create even more opportunities to ask new questions.

I come face to face with questions of domesticity and tameness every day and find this a fascinating question. I own a dog and share my house with a couple of cats (the difference feels important). I’m always grateful that my dog seems to feel no impulse whatsoever to bite my face with her sharp teeth, and the cats enjoy a snuggle and a pet…when they aren’t living out their predator instincts on other targets. 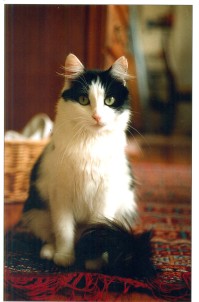 In 2016, I learned a new word: piebald. It refers to the handsome partial color plus white “tuxedo” pattern that my most recent cats have all sported. This trait–which is also found in other animal species–comes from a genetic variation for pigment development that also impacts other parts of the body as the animal is forming during its early days as an embryo. Serious diseases of adulthood that also affect humans, such as heart disease and cancer, may also be influenced by some of these early embryonic changes. (A Scientific American article by Christian Yates outlines some of the research in this area, including Yates’ own work.) Piebald patterns reveal not only developmental programming for the body, but also behavior, because animals that are more domestic (including the domestic foxes), also often feature piebald patterns. (See this 2009 scientific review by Lyudmila Trut and colleagues for more information about their foxes, piebald patterns, and other evolved traits of domesticity).

Because piebald developmental programs and physiological markers such as stress hormones affect many types of animals (including humans), it’s natural to want to make connections between other species and our own aggressive and domestic tendencies. Why do people behave in “tame” societies, or display aggressive behaviors (individually or collectively)? There’s no clear answer, but biologists, philosophers, psychologists, anthropologists, sociologists, and many others continue to examine these types of questions from many angles. We can turn to other primate species for clues about our own shared evolutionary history and the genetic programs that distinguish each species behavior from that of another. Ever since Jane Goodall first began studying chimpanzee (Pan troglodytes) behavior decades ago, we have cataloged the tame and aggressive behaviors in this species. Other primates, such as bonobos (Pan paniscus) are typically more peaceful. (See “What is War Good For? Ask a Chimpanzee” by Erin Wayman writing for Slate). What evolutionary changes have driven these behaviors, and likewise our own?

Noted neurobiologist and physiologist Robert Sapolsky has even written a recent book on the topic of human aggression and “tameness” called Behave: The Biology of Humans at Our Best and Worst. (He also made a TED Talk in 2017, “The biology of our best and worst selves.”) From stress hormones to the environment in which we are raised, Sapolsky addresses many questions and raises more about our own biological relationship with aggression and tameness.

So how tame are my cats, really? Or the foxes of Russia? Will they be the next domesticated species to join human households? Will humans evolve to be more or less peaceful over time? Bit by bit, scientists are chipping away at some of the answers. But there’s still plenty more to discover.