Did you see the news recently about the whale that died in Thailand because it had a stomach full of plastic bags and other trash—more than 17 pounds’ worth? How about about increasingly vocal efforts to remove plastic drinking straws from the list of common dining accessories? Plastic news really caught my eye that past couple of weeks. Are there more reports about plastic these days, or just new momentum to talk about it, and maybe do something about all this trash? For this installment of my blog, I decided to tunnel around a bit online and see what else I could find about plastic in the news.

What’s not in dispute: the world has a plastic problem. A big one. Our love affair with seemingly cheap, lightweight, clean, and disposable products and packaging have created a big mess. From our streets, parks, and cities to the farthest reaches of the ocean, plastic waste—both large pieces as well as microscopic particles—is everywhere. Perhaps you’ve heard of the Great Pacific Garbage Patch. It’s over a million square kilometers of trash circulating in a region of the Pacific ocean between Hawaii and California. Not familiar with it? I’ll wait while you check out some helpful infographics from The Ocean Cleanup organization… Ready? More than a million tons of new plastic is estimated to enter the ocean each year, from coastlines and rivers. Many of the big pieces find their way to these eddies in the ocean, and they don’t break down over time (though they may break apart). Smaller bits of plastic can be mistaken by ocean animals for food—or just end up accidentally ingested. This leads to problems for marine wildlife and the people who depend on healthy ocean creatures and ecosystems for their own food or livelihoods.

Unfortunately, plastic is now inescapably part of both land and marine environments. How did we get to this point? Apparently it all started in the late 1800s with hair combs, made of a newly engineered material called celluloid, the first synthetic “plastic” polymer. Celluloid also launched the motion picture industry. Fast forward through the decades to land us in a world amazingly full of plastic. Curious? I found out a little about the history of plastic in this Scientific American excerpt from Susan Freinkel’s 2011 book Plastic: A Toxic Love Story (which I’m adding to my book reading list). Again, I’ll wait while you go learn about plastics in the 20th century…

I remember life without quite so much plastic. Little things, really. Back in the 1970s, we bought beverages in glass bottles and aluminum cans (with those horrid little pull tabs, but that’s another problem). My grandmother treated me to a small, glass, returnable bottle of Coca-Cola as an occasional treat, served with a paper straw when we were feeling particularly festive. I enjoyed taking the bottles to the grocery and watching them disappear on the conveyor belt to the back of the store, to be refilled at the local bottling plant (visiting there made for a fun school field trip, too). (Fun fact: the last returnable 6.5-oz glass Coke bottles went out of use in 2012 in tiny Winona, Minnesota.)

In the late 1970s, in a push to help us inch our way toward adopting the metric system, schoolkids were taught about new-fangled two-liter bottles of soda (check out this nostalgic ad from Pepsi). I remember them quickly being replaced with “shatter-resistant” lightweight plastic bottles, which took their place alongside aluminum cans as a new industry standard for soft drinks (here’s Pepsi’s classic promotion of these new bottles). Within just a few decades, plastics became ubiquitous, in the kitchen and beyond. (The increase in consumption of soda is a topic for another day.)

But growing demand for new consumer products and a disposable lifestyle have seemingly always been at odds with the environment. The 1970s most famous effort to convince people to properly dispose of their disposables, the “Crying Indian” ad from Keep America Beautiful, spurred a generation to action to clean up their world. Kids of that era also learned to “Give a Hoot, Don’t Pollute” from Woodsy Owl. The idea that we needed to put all this litter in the appropriate place started many new initiatives about trash removal, recycling, and reducing consumption. Today, each community manages trash and recyclables in different ways. Recycling efforts are hailed as the solution to the problem of accumulating trash, but recycling levels are low, and the success rates vary. It’s even hard to know how to recycle properly, even for the highly motivated consumer. Here’s a recent article on the subject: if you recycle are you recycling correctly, or just winging it? For more on the challenges of recycled plastic, check out this 2013 perspective on bottle and can recycling through the years, or Keep America Beautiful’s updated efforts to help individuals contribute to the recycling effort. (For a different perspective on the legacy of the Crying Indian ad, check out this recent article, which considers whether manufacturers were let off the hook too much for their role in producing so many plastic and disposable items in the first place.)

Meanwhile, so much trash—especially petroleum-based plastics—continues to be manufactured and make its way into the environment. While reading up on plastics, I learned that June 5 is designated annually by the United Nations as “World Environment Day.” The theme for 2018 is “Beat Plastic Pollution.” For some remarkable pictures showing the scope of the problem, check out this article from The Atlantic highlighting the observance. The UN’s environmental division itself describes the major problems and proposed solutions on their website. Erik Solheim, UN Environment Chief, even penned an editorial titled “The Planet Is on the Edge of a Global Plastic Calamity,” to mark the occasion. Perhaps that’s why plastic trash was spotlighted in the news this week. Or maybe it’s because businesses, governments, scientists, and individual consumers are really starting to take more action, and it’s gaining traction and attention.

A trip to the supermarket can send you home with more than your groceries. By Peteruetz [CC BY-SA 4.0 (https://creativecommons.org/licenses/by-sa/4.0)%5D, from Wikimedia Commons

For example, bans on single-use plastic shopping bags have become a hot-button issue around the world. California banned plastic bags in 2014; New York is considering it (see this article for more on these decisions.). Kenya banned them last year and is seeing some success. In the United States, the topic is gaining traction, from local to state levels, and has certainly instigated some tough conversations about what we value as communities. I was curious about the scope of these legislative decisions and found this website that summarizes legislative activity on plastic bag bans around the United States. Plastic microbeads, found in many beauty products, were banned in the U.S. in 2015. Now, abruptly, the focus has turned to plastic drinking straws. I remember some years ago that my local zoo banned drinks with plastic lids or straws for the safety of the animals. Seemingly overnight, this effort is going viral. Have we reached a tipping point in thinking about disposable—and optional—plastic items such as straws and shopping bags? Maybe, and maybe not. But the conversations and news reports are becoming more frequent and more urgent, as are discussions of alternatives. Here in the middle of the North American continent, it’s easy to forget about the oceans and the coastlines when you don’t see them every day. But the health of our oceans and our own species’ dependency on a clean environment warrants more attention to these problems. 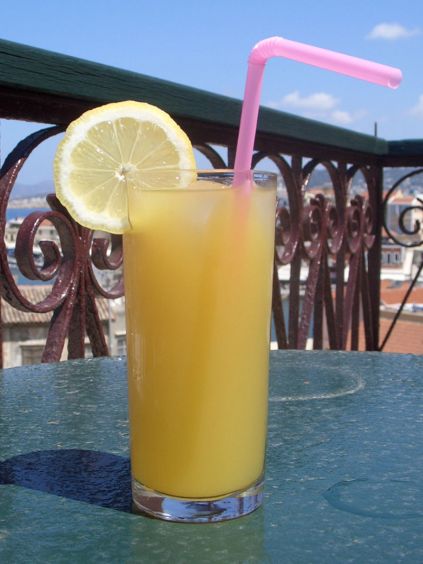 This drink would probably still feel like a vacation without the straw. By Martin Belam (https://www.flickr.com/photos/currybet/123889932/) [CC BY-SA 2.0 (https://creativecommons.org/licenses/by-sa/2.0)%5D, via Wikimedia Commons

As a parting thought, I’ll point you toward National Geographic’s “Planet or Plastic?” initiative. The organization is advocating for research, awareness, and action on this important global topic. An article from the June 2018 issue of their magazine provides an excellent overview of the many problems—as well as photos—to urge us to think carefully about our messes. I try to use reusable shopping bags whenever possible, and I recently have tried to reject straws when merely sipping water from a glass at a restaurant. I’ve learned quite a bit more about the plastic problem while reading more for this blog post, and I would encourage you to do the same. Together, we can make the world a better place. 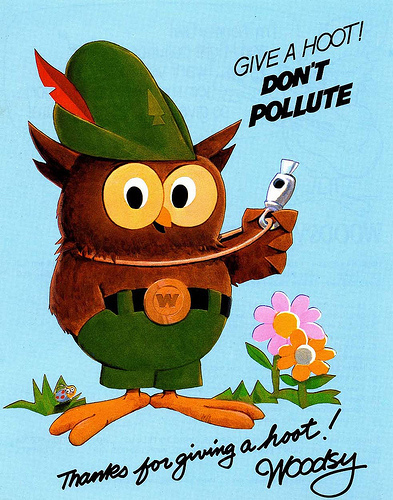 Woodsy Owl, champion of a clean planet. By Rudolph Wendelin (https://www.flickr.com/photos/usdagov/9733378263/) [CC BY 2.0 (https://creativecommons.org/licenses/by/2.0) or Public domain], via Wikimedia Commons