Did you hear the news? If you’ve got romaine lettuce on hand in the United States, and you don’t know where it came from (such as a local farm), you are being urged by the Centers for Disease Control (CDC) to throw it out. A batch of romaine lettuce from Yuma, Arizona has been contaminated with a strain of Escherichia coli (E. coli) bacteria (O157:H7) that produces a toxin that can make people quite sick. Because lettuce sold in most restaurants and groceries is grown in one part of the country and distributed widely, people all over the country have become ill from eating the contaminated lettuce.

Most of the time, we take a humble salad—and most of our food, really—for granted. In many parts of the world, we share a disconnected existence with our food sources and other plants in our environment. And yet, we wouldn’t be alive if it weren’t for plants. As the base of our food chain, plants provide all of the nutrients and energy that fuel our bodies (either directly or indirectly, when plant material is fed to animals that we eat). And, the abundant plant life on the surface of the planet has generated large amounts of oxygen gas through photosynthesis, so plant growth indirectly helps us (and them) break down carbohydrates with high efficiency to power our large bodies.

Humans have exploited plants not just for food, but also for medicines, building materials, fibers and paper, and shelter. Without plants, we’d really be out of luck. Our own well-being depends on a thorough understanding of plant biology. Of course, plants are fascinating organisms in their own right, and we are still learning about their secrets. Humming along in the quiet background of scientific inquiry, plant scientists continue to research topics that explore the amazing diversity and biological capabilities of plants, as well as new frontiers of agriculture. A few recent headlines about plants caught my eye, so I thought I’d pass them along here to highlight the diverse areas of plant research in the news this week.

First is a news release I saw about new research on movements of trees during the night. I teach a college course on the 24-hour cycles found in most organisms (called circadian rhythms), so I’m always on the lookout for news about this topic (see my previous blog post for more background). Recently, researchers in Europe tracked the movement of branches and leaves of different types of trees during the night and observed them moving over various time periods of several hours. The scientists concluded that these movements likely correspond to changes in water pressure inside the trees. A better understanding of how trees manage water resources at different times of day will undoubtedly help us better appreciate not only the physiology of plants, but also potential applications for water use by plants under different agricultural conditions. 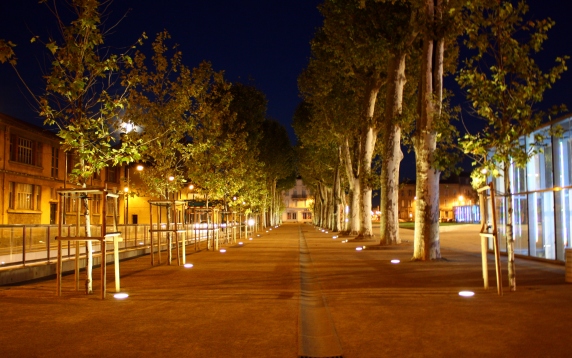 Do the trees dance at night when the people are all gone? Science may give us some clues. By Andy Mitchell from Glasgow, UK (Carcassonne) [CC BY-SA 2.0 (https://creativecommons.org/licenses/by-sa/2.0)%5D, via Wikimedia Commons

Plants have many ways to adapt to adverse conditions. Whether it’s conserving water, battling disease or predators, or surviving a heat wave, plants have evolved mechanisms for success in the same location, since they can’t just get up and walk away from their environment. Another recent news story highlighted research on extended dormancy in plants. Apparently, many adult plants (and not just their seeds) can weather a poor environment by simply going dormant in the soil—in some cases for decades—without emerging each spring until conditions improve. Dormancy is a well documented survival mechanism in plant seeds, as well as in the spores of many fungi and bacteria, but the new study by a large team of researchers described in the ScienceDaily report highlights that more study is needed of how plants successfully weather adversity in their environment at all stages of their life cycles.

One major topic of plant adaptability that has received quite a bit of attention from researchers is the ways in which plants may be able to respond to the changing environmental conditions around the world as the global average temperature continues to rise. In addition to temperature changes, climate models predict changes in rainfall, storms, and other parameters that may impact plant growth. In part, these changes are a consequence of higher concentrations of carbon dioxide gas in the atmosphere. Using the process of photosynthesis, plants trap carbon dioxide in their cells and convert it to simple sugars, with energy supplied from sunlight. So, researchers have been curious to see how plant growth may respond from increased levels of available carbon dioxide in the atmosphere. Agriculture, in particular, may be impacted by plant adaptability to these different parameters. A news report from the scientific journal Nature describes new research from a long-term, ongoing study of grasses being grown under different experimental carbon dioxide conditions in Minnesota. The new research, published in a different journal, Science, describes how these grasses are growing better after several years of exposure to increased carbon dioxide, while other plants grew better initially but then struggled with soil nutrient depletion. The researchers are continuing the experiment and highlight the complexity of variables in understanding plant growth, soil composition, microbes, and other factors. As we grapple with changes in our climate, understanding how the plants we depend on will respond is an important concern.

Natural Kansas prairie. Grassland plants may have different adaptations to changes in carbon dioxide levels than other types of plants. By Environmental Protection Agency [Public domain], via Wikimedia Commons

Plants in space? Scientists working with the International Space Station want to find out. By NASA [Public domain], via Wikimedia Commons

One fascinating application of understanding plant growth here on Earth may have consequences far beyond our native soils. An international team of scientists working in collaboration with the International Space Station, EDEN-ISS, is figuring out how to grow food in space, on the moon, or even on Mars. Long-term living and working in space by humans requires fuel, both for the spacecraft and for the people. By growing food in large containers in the isolated and inhospitable conditions of one of the most isolated habitats on Earth—Antarctica—scientists hope to find ways to create nutritious, fresh food for astronauts living away from their natural food supply, truly a daunting task. In the book The Martian, by Andy Weir (and its subsequent film adaptation), an astronaut stranded on Mars had to make due by craftily farming potatoes while awaiting rescue. With some careful planning on our part back on Earth, space gardens may move out of the realm of science fiction to science reality. To learn more, check out this recent article from National Public Radio about the Antarctica agricultural experiment, and take a virtual tour of the facility courtesy of EDEN-ISS. (You can also read here for more information about how more science from NASA was incorporated into the storyline of The Martian.)

Houseplants can help make a house feel like a home, and they may improve our air quality. By AJ West [CC BY-SA 4.0 (https://creativecommons.org/licenses/by-sa/4.0)%5D, from Wikimedia Commons

How can we use information about plants to make our lives better closer to home? Because plants absorb carbon dioxide and produce oxygen, it has been appreciated for some time that having plants in a home or office likely can make the air a little fresher, and maybe cheer us up a bit with their colorful presence. This week, another news release highlighted a new scholarly review of this topic. Some scientists think a little more research into these parameters—and which plants would be the best indoor companions—is warranted. As human society embraces increasingly urban environments, determining how to best live in and among our manufactured structures is a hot topic in architecture and urban planning. Sustainable indoor environments need to account for the people, animals, plants, microbes, and structural materials (wood, concrete, plastics, etc.). Helping people lead healthier lives at home, at work, at school–even in hospitals–makes a lot of sense. Remembering the important value that plants add to our lives is a good start.

We often think of plants as rather static creatures, quietly standing in place, growing a bit, maybe making flowers or fruits that we enjoy. But on the inside, plants have a lot going on. We don’t entirely understand their physiology or the complex relationships plants have with the nonliving environment, the microbes in the soil that provide them with nutrients, or the other organisms that make them sick or try to eat them. But the more we remember to think of plants as complex, truly living and dynamic organisms, the more we can appreciate the diversity of the world around us. This week, the long-running radio program, “A Moment of Science,” aired a segment called, “Can Plants Learn?” Understanding how plants sense and respond to their environment gives us perspective on the challenges they face and our own human condition. It’s worth studying and reflecting on the lives of plants, and seeing what new findings “crop up.” Maybe we’ll learn some things, too, alongside our botanical companions on planet Earth.

One thought on “The under-appreciated lives of plants”