Recently, two science news topics crossed my path about seemingly very different themes: genetically modified flowers and sea creatures that glow. The articles caught my eye for different reasons, but it was thanks to a casual conversation on social media with a friend about a third science news article about a rare genetic disease that caused me to consider a different kind of connection between these articles: our relationship with the color blue in nature. Blue is famously the color of the oceans and the sky, but we marvel with delight when we see glimpses of this rare color in living things. Most above-ground parts of plants are green, thanks to the pigment chlorophyll that captures selected wavelengths of sunlight whose energy is used to build sugars. That’s not easy, metabolically speaking (and popularized in song by Kermit the Frog), but it’s happening all around us and provides the basis for our food. Other common plant pigments are revealed in the orange of a carrot, the purple of a grape, or the red of a strawberry. Most mammals are relatively drab–grays, browns, black and white dominate when camouflage is the goal. Beautiful blues are reserved primarily for birds, insects, and other species in which flashing bright colors contribute to mating strategies, deception, warnings, or just tricks of the sunlight bouncing off of iridescent surfaces. But no doubt, we view blue as “special,” and its rarity in our daily lives gets our attention. So what about the “blue news” caught my eye?

First up: genetically modified mums. Biologists have learned more details about how the plant pigments that color flowers are produced. Each color we see is the result of how light is absorbed by pigment molecules made through multi-step biochemical pathways. Each step is controlled by an enzyme. If we learn what these enzymes are and how they work, we can understand how different color variations are made. And so, scientists are learning more about how various colors of flowers are made–such as red, orange, pink, yellow, white, and purple. But there aren’t really many truly blue flowers. In a breakthrough of genetic manipulation, scientists determined that adding two genes (programs for the enzymes needed to make the pigments) from other plants to the common garden plant chrysanthemum could create truly blue flowers in this species for the first time, which hasn’t been possible using traditional breeding strategies. 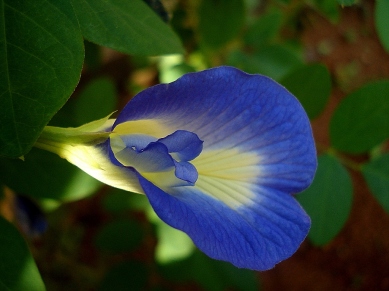 The novelty of blue chrysanthemums or other common household flowering plants certainly gets our attention, because we recognize the rarity and beauty of blue flowers in nature (like the butterfly pea plant, from which blue pigment genes were used in the mum study). Read more about the idea of blue mums and some related links here, or check out the original scientific report for a sense of the biochemistry involved in determining flower color.

Meanwhile, last week, William Broad brought the blues to light in an interactive article for The New York Times (which includes video, images, and links to other resources) about recent findings on bioluminescence, or the property of organisms to make their own light. Earlier this year, researchers at Monterrey Bay Aquarium in California quantified, somewhat startlingly, that about 75% of ocean life likely is bioluminescent in one way or another. Much of that light, intriguingly, is blue. We land-dwellers can catch glimpses of this phenomenon at delightful destinations (see, for example, this link to a list of beautiful bioluminescent beaches around the world), but as a species, we are just beginning to understand that what we once thought was rare–glowing blue sea creatures–may be much more common than we thought, simply because we hadn’t yet looked enough. (See my earlier blog post on oceans for more musings on what lies beneath the sea.) 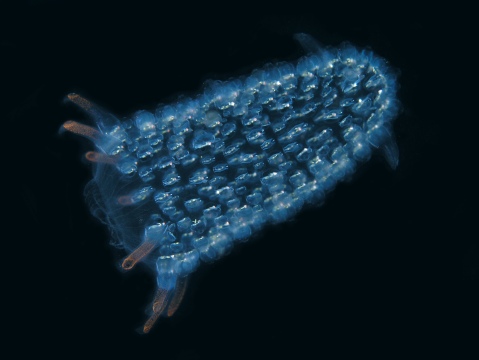 On land, blue animals are a rarer sight and inspire oohs and aahs: the blue morpho butterfly, the blue-tailed skink lizard, the charming blue-footed booby…their common names even include the color blue to point out just how remarkable they are! The striking blue coloration can arise by reflecting sunlight (in the case of the butterfly, for example) or by pigmentation (the booby’s blue feet come from ingesting pigments in their diet: learn more at this link), but in most cases, these animals don’t have the blues. The blue color is a unique part of their defense strategies or mating success. 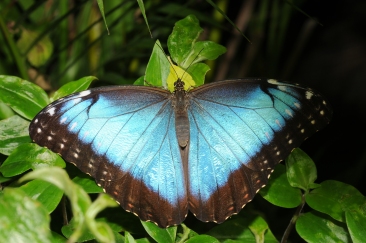 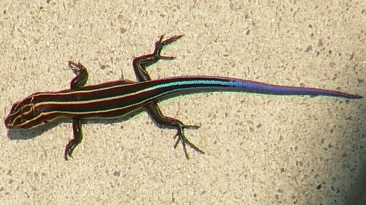 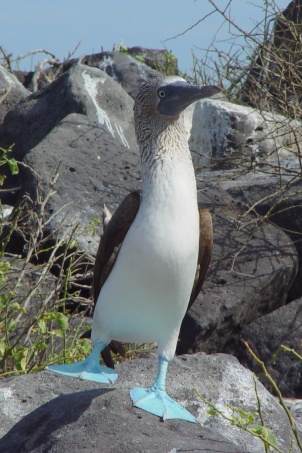 In America, I’ve been programmed to associate the color blue with cold. From faucet labels to the marketing of products in the grocery, blue means *cold*. (The blue-footed booby looks like it needs some warm booties!) Likewise, we associate the warm tones of reds and oranges with the warmth of a fire, or of warm and healthy bodies. As relatively hairless mammals, this is important, because the fading of pink tones and development of blue tints–especially in individuals with light pigmentation–can be obvious cause for concern that a serious medical condition involving blood flow or hypothermia may be setting in. Blue skin is unusual enough that the blue tones assigned to the virtual stars of the movie “Avatar” certainly gave some viewers pause to consider this variation from our usual experiences. (For a recent review of some work on color and human psychology, see this link.) This week, a friend and fellow blogger remarked on social media about a news article from a few years ago about an interesting genetic defect that once affected a small population of interrelated individuals in the state of Kentucky in the United States. The “Blue Fugates” were a family with a rare mutation for increased amounts of methemoglobin relative to hemoglobin in their blood, which affected how oxygen was carried in the blood and gave rise to a distinct blue tint to their skin. Because the family was somewhat isolated and interbred with each other, many family members developed the same condition, which led to their curious fame. Although they seemingly suffered no serious health effects, they were nonetheless affected at a molecular level, which has helped geneticists and physiologists learn more about the role of specific molecules in oxygen transport in the blood, as well as the effects of interbreeding on rare genetic traits (see this article for more on the story of the Blue Fugates).

As we continue to explore the reaches of the cosmos, the depths of the oceans, and the intricacies of the genetic code, we may find more blue in nature than we first imagined. New scientific research about the world we live can be curiously surprising and intriguing. What blue discovery will be next? The sky (or the sea) is the limit.

One thought on “Nature’s blues”